Both 1D (histogram) and 2D (biaxial) flow plots can be placed individually, or generated and arranged based on annotation data as a pivot table.

Creating a biaxial plot or histogram:¶

Overlays can be created with pivot tables.

To create the example above, a first flow plot was placed as described above. The settings for the left biaxial plot were:

When making a gating strategy, it’s often easiest to copy and paste the previous flow plot. The histogram was made by copying the previous plot, and then changing:

The final plot was a copy-paste of the histogram, with the following changes:

As a final touch, arrows were added from the toolbar to indicate the relationship of the plots. Many other styling options are possible for flow plots.

Example: Coloring a dot plot by a channel¶ 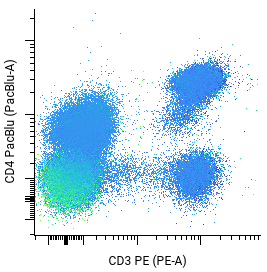 Dot plots can be colored using any of the channels in the FCS file. The example above is colored by CD20 to identify the B cells relative to CD4+ and CD4- T cell populations.

Some data visualization options are common to all graph types, but some options are unique to flow plots.

Cividis’s blue-yellow gradient has perceptually linear brightness. Cividis data visualization is optimized for people with or without color deficiencies, and converts to grayscale without loss of information. 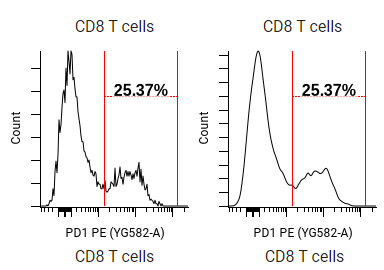 Flow plots can be visually smoothed by changing the Plot Settings. If the smoothing is zero, no smoothing is applied; higher numbers increase smoothing. Above are examples of smoothing settings of 0 (left) and 1 (right) for the same data.

Both undersmoothing and oversmoothing can lead to misleading graphs of data. Undersmoothed plots, especially on small data sets, will emphasize individual peaks, obscuring the similarities of close samples. However, smoothing values that are too high will inappropriately merge peaks, reducing or even eliminating distinct populations. Oversmoothing is especially a concern when positive and negative aren’t clearly separated, which can be unavoidable for some studies.

The contour plots above, taken from the same FCS file, show how smoothing settings can obscure the data. The image on the left has no smoothing. The undersmoothing results in “cold spots” that make the plot hard to interpret. The plot on the right is oversmoothed, making it hard to distinguish whether the events are from the same population or not. 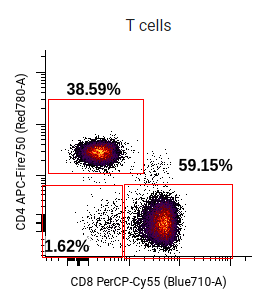 The Gates section shows or hides gates on a flow plot, and adjusts the gate label size and content. By default, the gate label will display the percent of the parent population within a gate. This option can be changed to the gate name or a variety of statistics, including median, standard deviation, or event count.

Flow plots (especially when displayed in pivot tables) can be helpful for reviewing gating. To adjust a gate, right click on the plot and select View in gating.

Subsampling a population can be helpful if there are a large number of events to display or when you are comparing populations or samples of different sizes (e.g. you are making a plot overlaying basophils on neutrophils).

Improper use of subsampling can create false impressions of data by distorting the apparent abundance of different populations.

Contour plots have additional options, all available under Plot Settings in the sidebar.

Percentile Start specifies the first percentile band; a value of 10 means that events below the 10th density percentile will be shown as individual dots (outliers) instead of within a contour. Events below this threshold this will appear as black dots.

This example shows plots with percentile start of 1, 10, or 50. It also uses the unfilled Color Scale, which is unique to contour plots.

Percentile Step controls how large each contour is; a value of 10 will create contour bands that each contain 10% of the events in a plot.

Histogram opacity can be specified by entering the percent opacity into Plot Settings.