These statistics plots use a setup interface similar to pivot tables. However, unlike pivot tables, any number of FCS files can be displayed per pivot position—ideal for summarizing replicate data.

Bar charts, line charts, and heatmaps show the arithmetic mean of all matching files, along with either the standard deviation or standard error of the mean (see replicate data).

Box plots show the median line flanked by the first and third quartile, with whiskers spanning ±1.5 times the inter-quartile range.

An FCS file will be omitted from a plot in the following scenarios:

Additionally, box plots omit FCS files when the plot is log-scaled and the statistic is negative or zero. Bar and line charts and heatmaps include zeros and negatives when calculating the mean of multiple files, but the mean will not be displayed if it is negative or zero.

This example shows the frequencies of several cell types for five different species, based on several dozen biological replicates per species. A single dot is shown for each donor. The box shows the lower quartile, median and upper quartile. The whisker spans ±1.5 times the interquartile range.

Box plot orientation can be changed from the sidebar. Under Plot Settings, choose horizontal or vertical.

This example shows the degree of change in phospho-P38 in response to four stimuli in six cell types.

Heatmaps can be used to show the correlation of experimental vaiables. This can be useful to show the coexpression of signaling molecules, the coordination of different cell types, or other instances where variables in the same group could affect or coincide with each other. 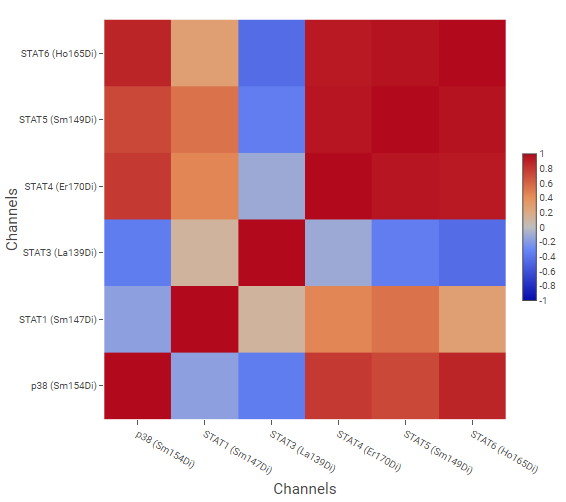 The example above shows correlation of signaling molecules, using the channels of molecules of interest as Pairwise Rows/Columns, and cell phenotypes created by gating as Correlated Vectors.

Pearson requires the data to be normally distributed, not have significnat outliers, and have a linear relationship.

Spearman uses ranked data and is suitable for any distribution (not necessarily normal) with any monotonic relationship (not necessarily linear). It is sensitive to error and thus not well suited to data with outliers.

Kendall also uses ranked data and is suitable for any distribution with any monotonic relationship. It is more accurate than Spearman when the sample size is small and is less sensitive to error, making it useful when there are outliers. Overall, it is more robust than Spearman.

When looking at changes in data, such as cell signaling before and after treatment or changes in population frequencies over time, you can display normalized data in heatmaps, bar charts and line charts.

The possible scaling and normalization methods are as follows:

Regardless of your choice, you should always report which metric you are showing.

All of these formulas are estimates and make assumptions, including that the experimental and control conditions are uncorrelated (i.e. that there is no systematic bias) and that the error is relatively small.